Down syndrome is a genetic condition in which a child is born with an extra copy of chromosome 21. It is caused by an extra copy of chromosome 21 in a baby’s cells. It happens by chance at birth, and there is still no proof that it is the result of any behaviors taken before or during pregnancy. A baby with Down syndrome will be born in about one out of every 700 pregnancies, with the risk increasing as the pregnant woman’s age rises. Down syndrome screening as part of prenatal care could help detect the disorder before the baby is born.

Individuals with Down syndrome tend to have certain physical features in common. These may include: 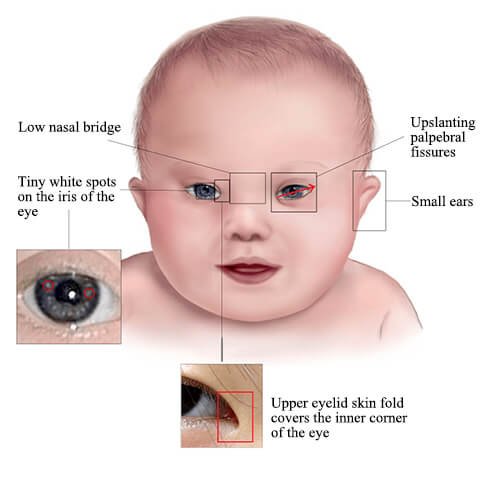 People with Down syndrome may have the following health problems:

Causes of Down Syndrome Types

People with Down syndrome are born with an extra chromosome. There are three possible causes:

The first possibility is Trisomy 21, which affects approximately 95% of the patients. Trisomy 21 patients have three number 21 chromosomes rather than two. Humans, on the other hand, typically have 23 pairs of chromosomes, each with its own piece of DNA.

Down syndrome diagnostic tests during pregnancy

There are two basic types of Down syndrome tests: screening and diagnostic tests.

Diagnostic tests include chorionic villus sampling (CVS) and amniocentesis. A diagnostic test can determine whether or not the baby has Down syndrome or any other genetic condition. Under ultrasound guidance, a needle is inserted into the uterus to extract placental cells or amniotic fluid for chromosomal analysis. Amniocentesis is typically completed between the 15th and 20th week, and a chorionic villus sample is usually conducted between the 10th and 13th week. Diagnostic tests are usually very safe procedures, but there is still a significant increase in the risk of miscarriage after either treatment.

What if the genetic disease is discovered in the pregnancy?

The doctor will examine the concept of the genetic disorder, its impact on the baby, and the subsequent risk pregnancies to the couple. The pregnant can talk to her doctor about what kind of help is available from hospitals and other institutions, and she will be better prepared for her baby’s birth. Babies with Down syndrome can live semi-independently with the guidance of specialized care and education, as well as community assistance.