A number of people had complained about the accuracy of the Chinese Gender Chart. They, however, do not know that they had been putting the wrong data on the chart. In order to get a high success rate in gender selection or prediction, you must know the right ways to use the chart. By following these guidelines, you will get the best out of the chart.

1. Chinese Gender Chart is based on the Chinese Lunar Calendar

As the CGC was invented in ancient China, it is not surprising that both age and month required by the chart should be calculated from the Chinese lunar calendar. There are some people who argue that the Gregorian (western) calendar should be used. Think about the chart has several hundreds of years of history, and the Gregorian calendar was not adopted by China till the early 20th century, therefore the argument is simply not valid.

What is Chinese Lunar Calendar?

A Chinese lunar calendar (or simply lunar calendar) is an ancient Chinese invented calendar system whose date indicates the moon phase. Lunar months are determined by the period required for the moon to complete its full phasic cycle of 29 and a half days, a standard that makes the lunar year a full 11 days shorter than its solar counterpart. This difference is made up every 19 years by the addition of seven lunar months, which is called leap month. For more detail about the Chinese Lunar Calendar, please read this.

How to convert Gregorian Calendar to Chinese Lunar Calendar?

In traditional Chinese age counting, a newborn baby is one year old. And everyone gets one-year increment of age on Chinese (Lunar) New Year. So a baby born a day before Chinese New Year could be two years old a couple of days after birth. This is very essential as errors always occur on miscalculating the age of mothers. Note that the western calendar date of lunar new year is different year by year.

To avoid confusion and errors, we have set up four easy steps that help you find the correct mother’s age when conceived. 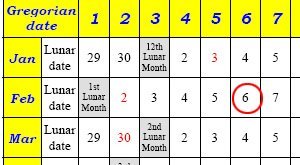 3. Try to Conceive in the Middle of a Conception Period 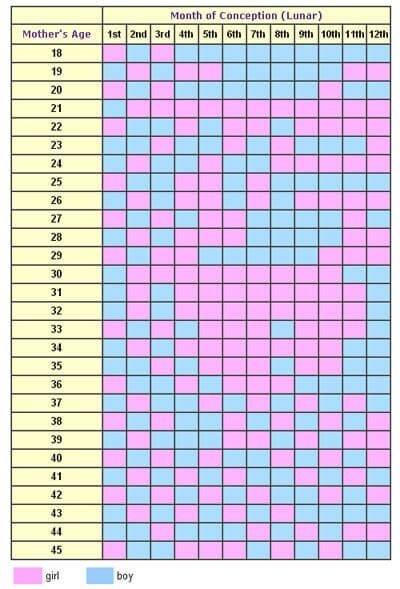 We all don’t know the rationale behind the Chinese Gender Chart. Nevertheless, we know that there should be some changes between two successive conception periods, which lead to different baby genders. To prevent possible errors, don’t choose to conceive at the first and the last ten days of any gender periods, which are considered to be the days of unsteadiness. Remember these; 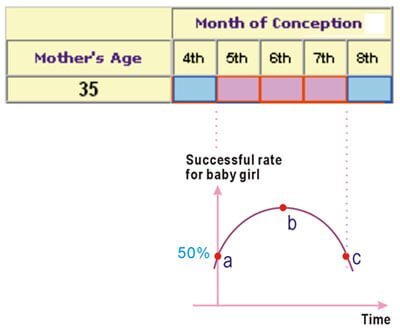 As we pointed out at the previous page about “what is lunar calendar”, a lunar year is 11 days shorter than a western year. Dates in a lunar calendar, therefore, rapidly move backward through the seasons, so that a day in summer eventually ends up in winter, and vice versa. This makes it difficult to use the calendar to plant crops or schedule seasonal religious celebrations. This difference is made up every 19 years by the addition of seven lunar months. On average, we have a leap year (with a leap month) about every three years. The following table shows you the date of leap months from 1931-2030.