I Ching (易經), or the “Book of Changes” is known as the most respected as well as the oldest literature on the subject. The symbols in the book have been studied by scientists and scholars in the west, and the ancient texts book has been translated into texts which are readable in the modern-day world. The “Book of Changes” represents the Oriental wisdom, and the symbols that are found within the book have been incorporated into the flag of South Korea. The five elements, the eight trigrams, and the theory of Yin and Yang are all believed to belong to this ancient work from China. 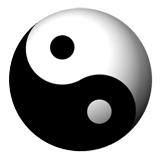 Yin and Yang, the dualism possessed being the underlying principle for everything that exists in nature. Yang represents the male and positive side of everything, while represents Yin the female and negative side; nothing is truly complete without these two sides, the male being bright and positive and the female being dark and negative. These two sides to everything are integrated and complement each other to form a whole object. Harmony could only ever be achieved when both Yin and Yan are present. This belief can be seen in the symbol of “Tai Chi”, where white and black circles merge together to make the whole. This philosophy is crucial in Chinese culture and is a fundamental element of their everyday life and their way of thinking. 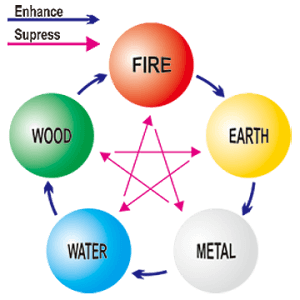 According to I-Ching, there are five forces and energies present in everything that is present in the universe. These five energies or forces are all commonly found on the living planet; wood, metal, water, earth, and fire. Everything that is found on the living planet is by metaphysical belied subject to these five forces, whether abstract or material, and even man and his fortune or misfortune are subject to the influences of these five elements. The five forces found in every object on the planet are not static; they are constantly reacting with each other, and the five elements within are the cause for all changes that occur in the universe, as well as all events and matters that take place. The five basic elements are constantly reacting with each other; however, this reaction does not cause chaos in the universe due to some fundamental rules that are present. The rules that ensure that the reactions of the five elements are not chaotic are the cycle of destruction and the cycle of birth, the two cycles being explained with illustrations below. 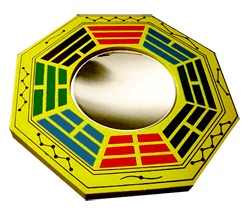 When studying I Ching, the “Eight Trigrams are another basic component. Each one of these trigrams is formed by three continuous or broken lines. When a broken line is shown, this represents the Yin of the matter; a continuous line represents the Yan of the matter. When you put together all the different combinations of three lines, both continuous and broken, you will find that there are indeed eight different combinations that make up the eight trigrams. Each of these eight trigrams has a meaning that is assigned to it, and these include a natural phenomenon, a season, a class of person, a bodily organ, a family member, or a basic element or animal. These eight different trigrams are a representation of everything that you can find in the living universe. If you go on to combine any two of these 8 trigrams, you will find that the number of hexagrams will total 64, each of the hexagrams being a representation of six lines. By studying these hexagrams, you will find a more detailed representation of the matter such as the relationship between two human beings.