In Chinese society, there are unwritten rules that women have to follow once pregnant. Here are the most common ones.

The Chinese believe that pregnant women should not handle scissors, particularly in the bedroom or near the marital bed. Although it is practical advice on one level, as pregnant women can be notoriously clumsy, the superstition is that handling scissors will somehow disturb the unborn baby and cause birth defects such as undeveloped limbs or harelips. 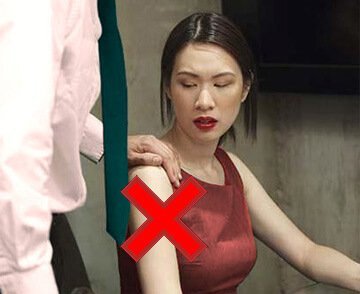 There is an acupuncture point on each side of your shoulder. Strong force at the point may result in miscarriage. Although it’s hard to avoid in the first trimester before you are showing, and even later in pregnancy from behind, and generally when someone taps you on the shoulder it’s to get your attention, so not quite sure how you are supposed to avoid this one.

Pregnant women are supposed to look only at pictures of beautiful children, perhaps to invoke the power of the law of attraction, and ensure they give birth to a healthy beautiful baby. OK, so maybe you can’t avoid seeing ugly images for nine whole months, but I have to agree with this one. It’s got to be better to immerse yourself in positive images than to dwell on the negative during what is already a stressful enough time for your body if nothing else.

The flip side of the last one, I suppose, is the advice to avoid funerals, or if you have to attend one while pregnant, wear a scarf. The scarf must be red, the color of luck, and is worn around the stomach to protect the unborn child. The mother may also wear a lucky amulet to ward off any ill effects of dealing with death while carrying life as well.

Some families may actually discourage pregnant women from attending weddings, and if they are allowed to attend they should on no account go near or touch the bride. It’s not about bringing the happy couple bad luck, it’s about the pecking order on the wedding day. Since no one should upstage the bride, and the fetal gods guarding the pregnant woman may outrank those protecting the bride, it’s simply considered bad form for the bride to come in contact with a pregnant woman on her special day.

✘ Prevent Changing or Moving Furniture in the House

The Chinese believe that at the moment when life is created (fertilization of an egg), a spirit will approach the fertilized egg. The name of the spirit is called the “baby god” or “fetal god” or in Chinese “胎神”. To make sure babies can be safely carried, the ancient Chinese warned the pregnant women that they should pay special attention to their daily activities simply because they cannot hurt the fetal god. It is said that the fetal god and the fetus are somehow physically connected. So if the fetal god is hurt, the fetus could also be hurt.

The job of the fetal god is to protect the fetus before coming out from the womb, so it always exists at the house of the pregnant woman. However, although the spirit takes care of the fetus, it is very important that it could be easily got angry or got hurt, and the fetus may result in physical birth defects or may die before or immediately after birth.

So how exactly can the fetal god get angry or get hurt and what are the consequents? Well, there are actually quite a lot, and here are some of them.

While it sounds ridiculous to believe the existence of fetal god, it is not uncommon to hear that the bad consequences did happen for pregnant women who did not follow these “customs”.

What you should do if the baby god is offended or hurt? You may need to go to a temple and ask for a written charm for fertility. Burn the charm, mix the ash with water, and then drink it. Hopefully, the baby god and the fetus are both OK.

Here is the question: could it be true that the baby god really exists, or just the ancient Chinese people who made up some stories to help pregnant women avoid accidents. I would choose to believe the latter one at this moment!